From Heraldry of the World
Your site history : All England Lawn Tennis and Croquet Club
Jump to navigation Jump to search 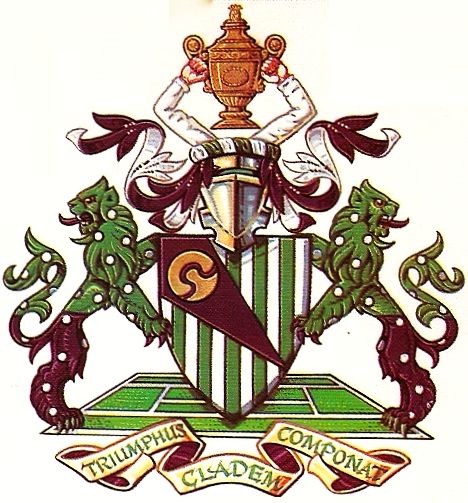 Arms : Argent five Pallets Vert over all on a Pile issuing from the dexter chief throughout Purpure a Roundel Or thereon a Bendlet sinister nebuly of one undulation upwards Purpure.
Crest: upon a Helm with a Wreath Argent and Vert Two Arms embowed vested Argent the hands proper holding aloft a representation of the Gentlemen's Singles Wimbledon Championship Trophy Gold. Mantled Purpure doubled Argent.
Supporters: Upon a Compartment comprising the surface of a Lawn Tennis Court two Lions salient reguardant per fess Vert and Purpure semy of Roundels Argent langued Purpure.
Motto: 'Triumphus Cladem Componat'.

The arms were officially granted on April 3, 1992.

On the shield the field of Argent and green 'stripes' reflect the carefully tended grass of the court, with overall a purple pile charged with an heraldic tennis ball alludes to the line of service.

The two supporters are lions which reflect the Britishness of the Club and its royal associations. The lions are parted fesswise green and purple, the horizontal line reflecting the two halves of the tennis court, and the semy of roundels representing tennis balls. The usual placement of supporters on a grassy mound is replaced in this instance by a tennis court.

The Latin motto "Triumphus Cladem Componat' recalls the famous lines from Rudyard Kipling's poem 'IF' which appear above the entrance to Centre Court, 'If you can meet with triumph and disaster and treat those two impostors just the same'. These words have come to represent the code of true sportsmanship.