From Heraldry of the World
Your site history : Alliance Assurance Company
Jump to navigation Jump to search 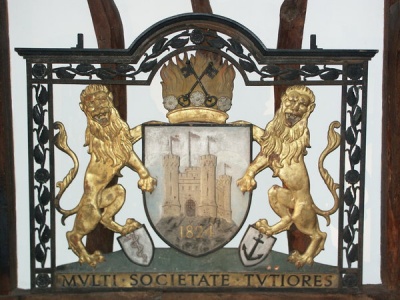 Arms: Argent, upon a rock issuant from the base proper, inscribed 1824 in gold numerals, a quadrangular castle also proper, pennons flying to the sinister from each tower gules.
Crest: In front of flames proper issuant from a coronet of four roses argent, barbed and seeded proper, set upon a rim Or, two keys in saltire, wards upwards, sable.
Supporters: On the dexter side a lion guardant Or, resting the sinister hind leg on an es­ cutcheon argent charged with a rod of Aesculapius gules; and on the sinister side a like lion resting the dexter hind leg on an escutcheon argent charged with an anchor sable.
Motto: Multi societate tutiores.

The arms were officially granted on September 14, 1933.

If you have any information on these arms Assurance Company mail us !