From Heraldry of the World
Your site history : Alliance and Leicester Building Society
Jump to navigation Jump to search 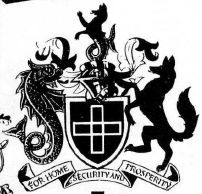 Arms: Azure on a Cross couped Argent a square Billet Azure between four Billets two fesswise in fess and two palewise in pale Gules all within a Bordure Argent.
Crest: upon a Helm with a Wreath Argent and Gules A Sea Fox sejant erect the vulpine parts Gules armed langued and with the piscine parts Azure.
Supporters: Dexter a Dolphin Azure and sinister a Fox Gules armed and langued Azure.
Motto: For Home, Security and Prosperity'

The arms were officially granted on November 2, 1987.

The dexter supporter, a dolphin, often associated with Brighton and Hove, represents the original Alliance Building Society and the fox on the sinister side features in the arms of the County Council of Leicestershire, alluding to the fox hunting tradition of that county.

The 'sea-fox' crest is a combination of the two supporters, and is believed to be a new creation in heraldic terms, although the idea of sea creatures goes back to the Middle Ages.

The motto was carefully chosen to relate to building societies,