From Heraldry of the World
(Redirected from Amicable Society) 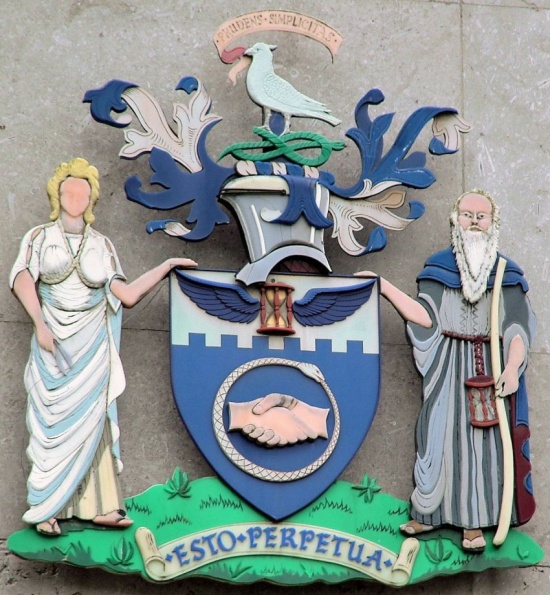 Arms: Azure, two hands in union couped at the wrist proper within a serpent, the tail in the mouth, Or; on a chief embattled of the last an hour glass sable between two wings elevated of the field.
Crest: On a wreath of the colours, On a serpent nowed, the head towards the sinister, a dove proper, from the mouth an escrol, thereon the words 'Prudens Simplicitas'.
Supporters: On the dexter side a figure representing Atropos proper and on the sinister side a figure representing Time p.roper.
Motto: Esto perpetua

The arms were officially granted on 9 February 1808 to the Amicable Society for a Perpetual Assurance Office; re-granted 14 April 1938 to the Norwich Union Life Insurance Society.

Strength and security are indicated by the battlements; the united hands (amity), refer to the basic and principal motive of the Society. The ancient emblem of eternity is represented by the encircling serpent. The serpent has always appealed to man's imagination — an emblem, too, of wisdom. In Roman times it was a household god and a symbol of long life and vitality. It symbolises the infinite duration of time in India, while in Egypt it was used as a mark of royalty and worn as a head-dress. In the arms it gives understanding and hope that this Friendly Union will endure for ever.

The hour-glass and wings on the chief refer to the quick flight of time — "The shifting hours, they fly on powerful wings," and consequently of the necessity of making prudent provision.

The dexter supporter is Atropos (Moirea or Parcae, Roman) one of the three fates — " the fate that cannot be avoided " — hence the cutting instrument in her right hand with which she severs the line of life. On the sinister is the well-known figure of old Father Time with his hour glass and scythe showing that " time conquers all and we must time obey." It is sometimes shown as a charge as a sundial or scales (of Justice).

The crest illustrates pictorially the manifest intention of the company. The motto at the foot stresses the motif of the complete arms — " Esto perpétua " — " Be everlasting."