From Heraldry of the World
Your site history : Amorbach
Jump to navigation Jump to search 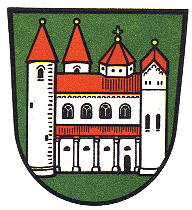 The town developed around the large Benedictine monastery Amorbach and became a city in 1253. All seals of the city have shown the monastery, but during the centuries the shape, numer of towers and size of the monastery have changed considerably. Most seals also showed the wheel of Mainz, Amorbach was part of the State of Mainz.

The present arms show the monastery taken from the picture of Hupp in the late 19th century. Besides the monastery on arms and seals there is a small cartouche dating from 1687 that simply shows a letter A. Whether this has been used often is not known.