From Heraldry of the World
Your site history : Angus Dunnet
Jump to navigation Jump to search 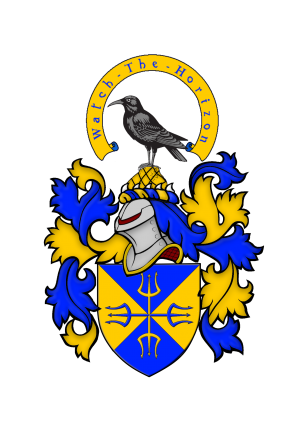 Arms:Per saltire Azure and Or a cross each end terminating in a trident counter changed.

Crest: Issuant out of waves of the sea Argent upon a rock Or covered by a fishing net Sable a raven Sable proper.

The saltire represents the armigers' ancestors who are from Caithness, Scotland. The colors and the trident are for the armigers' love of the sea and sailing.

The raven on the rock is an allusion to the cliffs of Dunnet Head. The net is a pun from the name.