From Heraldry of the World
Your site history : Annweiler am Trifels
Jump to navigation Jump to search 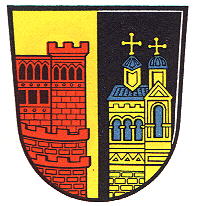 The oldest seal of the city is known since 1230 and shows a combination of the Trifels castle and the local church. The above arms are based on this seal and shown in arbitrarily chosen colours.

Already since the 13th century the city also used a smaller seal with the Imperial Eagle.

During the 18th and early 19th century the Imperial Eagle was also used as the arms of the city, see image below.

On June 16, 1841 the city was granted arms with the eagle, but in the colours of Bayern, silver and blue. These arms remained in use until 1950.