From Heraldry of the World
Your site history : Archdiocese of Atlanta
Jump to navigation Jump to search 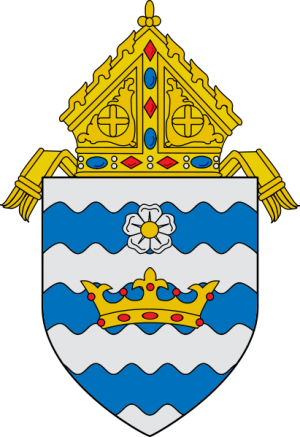 Argent, three bars wavy azure, in fess point a crown or, on the first bar a Cherokee Rose proper.

The Atlantic Ocean is represented on the shield by white and blue wavy bars, being the waves of the sea, seven for the Seven Sacraments.

The Crown of Christ the King denotes the title of the cathedral. The rose is the Cherokee rose, the State flower of Georgia (Rosa laevigata), as befits a diocese located in the Capital City. This rose is white with a yellow centre. The crown of Christ the King has also the secondary representation of the crown of George II, King of England after whom Georgia was named.

The blue and white wavy bends may as well symbolize the rolling foot hills of the Blue Ridge Country, but more important, they are the colors of the Blessed Mother.