From Heraldry of the World
Your site history : Archdiocese of Mobile
Jump to navigation Jump to search 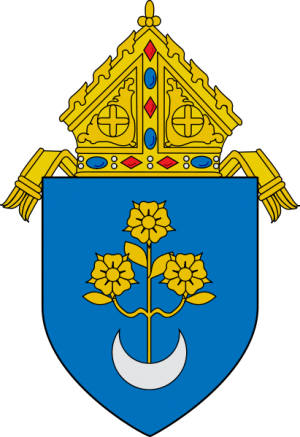 The city of Mobile was founded by two French brothers, Pierre Le Moyne d'Iberville and Jean-Baptiste Le Moyne. The Le Moyne arms featured three silver roses on a blue field. These were taken in the arms of the Archdiocese, but in gold to differentiate from the family arms. The crescent represents Mary the Virgin as patroness of the Cathedral of Mobile under the title of the Immaculate Conception. The crescent moon symbol is derived from a verse in the Book of Revelation: “I saw a woman clothed with the sun, and the moon was under her feet, and upon her head, a crown of twelve stars” (12:1).