From Heraldry of the World
Your site history : Archdiocese of Oklahoma City
Jump to navigation Jump to search 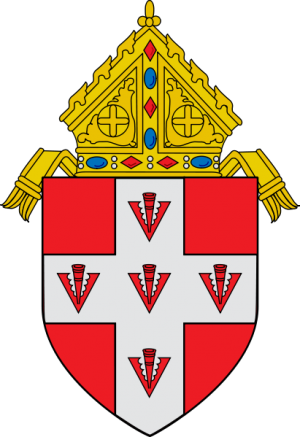 The archdiocesan arms were composed in 1924 when the See was known as the Diocese of Oklahoma. The red of the field of the archdiocesan arms represents the Choctaw word for Oklahoma, which translates to “red peoples.” The silver cross represents the Christian faith, while the five red arrowheads represent the Five Civilized Tribes - Cherokee, Chickasaw, Choctaw, Creek and Seminole - to whom Indian Territory, now known as Oklahoma, was deeded during the removal of these tribes from their historical homelands in South and Southeastern USA. Five downward facing arrowheads suggest peace and enlightenment, attributes of the Five Civilized Tribes and other Native American people of Oklahoma.

Arms of Bishops of Oklahoma City

Arms of Bishops of Oklahoma City-Tulsa