From Heraldry of the World
Your site history : Archdiocese of Seattle
Jump to navigation Jump to search 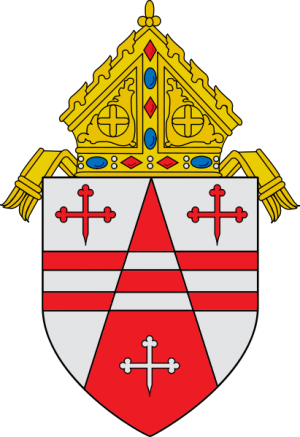 The arms are based on a variation of the family device of George Washington, the namesake of the State of Washington and location of the See city. The Washington family device consists of a silver field with two red bars and three mullets in chief, also in red. The three red mullets on the shield are replaced by three large crosses representing St. James the Greater, patron of the diocesan cathedral. The crosses are red in color symbolizing the martyrdom St. James underwent. The towering pyramid in the middle of the shield highlights Mount Rainier as a focal point and prominent landmark in the physical topography of the diocese.

Arms of Bishops of Nesqually

Arms of Bishops of Seattle

Arms of Archbishops of Seattle