From Heraldry of the World
Your site history : Archdiocese of Southwark
Jump to navigation Jump to search

Established : 1850 as Diocese of Southwark
Promoted to Archdiocese in 1965 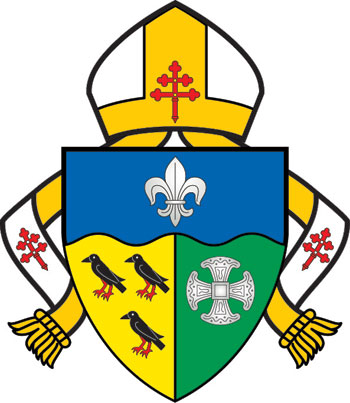 The principal patron of our diocese is Our Lady, conceived without sin. She is represented in the chief by a silver fleur-de-lys on a blue background. Both the fleur-de-lys and blue are symbols traditionally associated with Our Lady. The blue and the wavy division line refers to the waters which form a major part of the diocesan boundaries - the Thames and the Kent coast.

The lower right half shows three Cornish choughs (birds of the crow family), as seen on the coat of arms of St Thomas Becket.

The lower left half symbolises Saint Augustine of Canterbury. The Augustine cross, has been associated with Canterbury since at least 850 AD. It was there that St Augustine was bishop in the early years of the seventh century. The golden field symbolises London.

Above the shield is a bishop's mitre with its two lappets. There are three metropolitan crosses, indicating that Southwark is a Metropolitan Archdiocese - the province includes Southwark, Arundel and Brighton, Portsmouth and Plymouth. The green colour symbolise sthe green fields of Kent.