From Heraldry of the World
Your site history : Cathedral Chapter of Canterbury Cathedral > Archdiocese of York
Jump to navigation Jump to search

Established : 1531 from the Roman Catholic Archdiocese of York 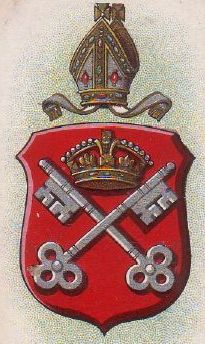 Gules, two keys in saltire argent, in chief a regal crown Or.

This Coat of Arms first appears to have been used by Archbishop Robert Waldby (1397-1398). The Crown originaly more resembled the Papal Tiara, but was made into a Royal Crown after 1531. The Arms thus alludes to St Peter. Anciently the Archbishop used as their official Arms a Shield identical with that of the See of Canterbury.

Literature : Symbolism of the Arms from Heraldry of the Chruch a Handbook by E.E. Dorling.