From Heraldry of the World
Your site history : Ashburton (New Zealand)
Jump to navigation Jump to search 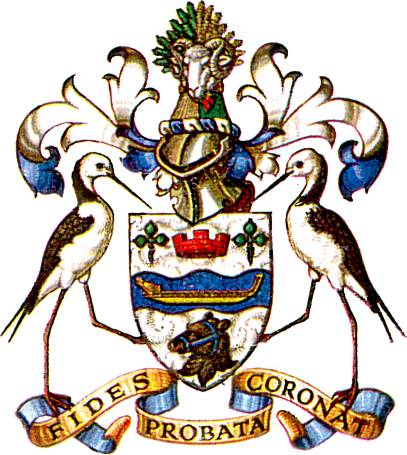 The arms incorporate portion of the arms of Lord Ashburton, the town being named after the 1st Lord Ashburton, who was closely associated with the Canterbury Land Settlement Scheme, and portion of the Arms of the Turton family, Mr and Mrs William Turton being first European settlers in what was to become the Ashburton Borough.

The muzzled Bear's head and the Division of the Arms into three, are taken from the Coat of Arms of Lord Ashburton. The trefoils are taken from the Staffordshire branch of the Turton family whose Arms were originally granted in 1663, from whom Mr William Turton was descended.

The blue wavy band is symbolic of the Ashburton River, whilst the Maori Canoe is a symbolic reference to the native race of New Zealand, and alludes to a Maori myth in which the Southern Alps of New Zealand is a Maori Canoe resting on its side. The Mural Crown is a symbol of Municipal Authority. The ram's head and the grain alludes to the industries producing the dominant source of wealth for the district.

The supporters, Himantopus himantopus leucocephalus, commonly known as the pied stilt, are wader river birds found in the district.

The motto - Fides Probata Coronat - is that used by the Portreeve and Burgessess of Ashburton, Devon, United Kingdom and appears to have been in use since the granting of the St. Lawrence's Charter issued in 1314 that, amongst other things, founded the forerunner of the Ashburton Grammar School. Although difficult of translation, its general meaning is - Faith Confirms What Has Been Proved Good and True - or - Faith Crowns True Actions.