From Heraldry of the World
Your site history : Association of British Dispensing Opticians
Jump to navigation Jump to search 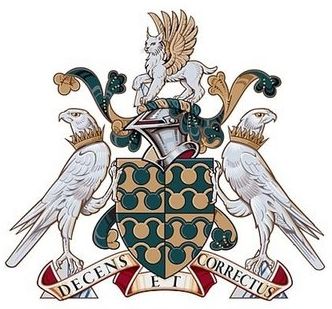 Arms : Quarterly Or and Sable four Barrulets wavy surmounted in the troughs of each and conjoined to a roundel countercharged
Crest: upon a Helm on a Wreath Or and Sable a Lynx statant and in trian aspect Argent winged Or resting the dexter forepaw on a Prism proper. Mantled Sable doubled Gold.
Supporters: On either side upon a Prism proper a Falcon reguardant Argent gorged with a Crown Rayonny Gold.
Motto: 'Decens Et Correctus'.

If you have any information on these arms of British Dispensing Opticians mail us !