From Heraldry of the World
Your site history : Association of British Neurologists
Jump to navigation Jump to search 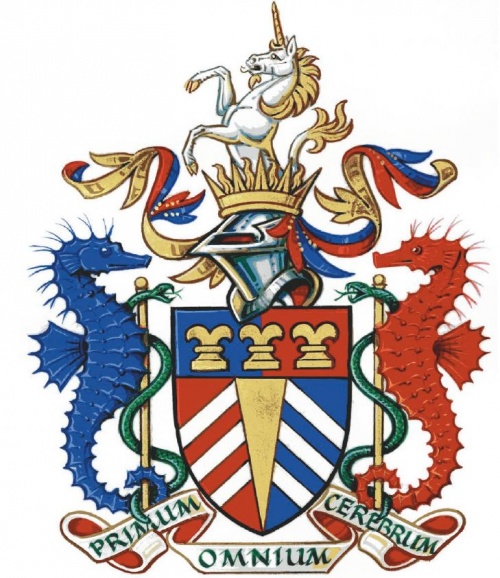 Arms : Per pale glues and azure three chevronels argent over all a pile throughout or on a chief per pale azure and gules three chess rooks or.
Crest : a demi unicorn argent armed maned tufted and unguled or.
Supporters : On the dexter a hippocampus azure and on the sinister a hippocampus gules each holding with the tail a Rod of Aesculapius or the serpent vert.
Motto: Primum Omnium Cerebrum

The arms were granted in January 2007.

The Association of British Neurologists is the professional organisation responsible for the delivery of neurological medicine in the British Isles. Founded in 1932, it celebrated its 75th anniversary in 2007, and elected to mark this point in its history by petitioning the College of Arms for a grant of armorial bearings.

The symbolism of the arms makes numerous references to the practice of neurology in Britain. On the shield itself, the background colours of red, white and blue are an immediate link to the British Isles. Superimposed on these colours, the main heraldic charges are a pile, which overlies three chevronels. This provides a heraldic allusion to the anatomical appearance of the lower end of the spinal cord and the nerve roots which descend from it, said to look like the tail of a horse, and described anatomically as the “cauda equina”.

The chief takes the colours of the shield, but counterchanges them. This makes reference to the neurological phenomenon of “pyramidal decussation”; i.e. recognises the fact that the right side of the brain controls the left side of the body, and vice versa. The heraldic chess rooks are used as an allusion to the intellectual complexity of neurological practice.

The crest is a unicorn. In mythical legend the unicorn carried healing powers in its horn. This heraldic beast emerges from a crown rayonny. The alternating straight and wavy components of the crown make graphic reference to the electroencephalogram in some types of epilepsy, which is technically described as having a “spike and wave” appearance.

Two sea-horses were adopted as supporters for the arms. On the undersurface of each temporal lobe of the brain is an area referred to as the “hippocampus”. The heraldic blazon therefore gives an immediate reference to this aspect of neuroanatomy. Finally each sea horse uses its tail to hold a Rod of Aesculapius, the universal symbol for the practice of medicine in general.

The motto lends itself to a number of different possible interpretations. Perhaps the simplest and most appropriate is “Above all, the brain”.

Literature : Info send to me by mail.