From Heraldry of the World
Your site history : Aston University
Jump to navigation Jump to search 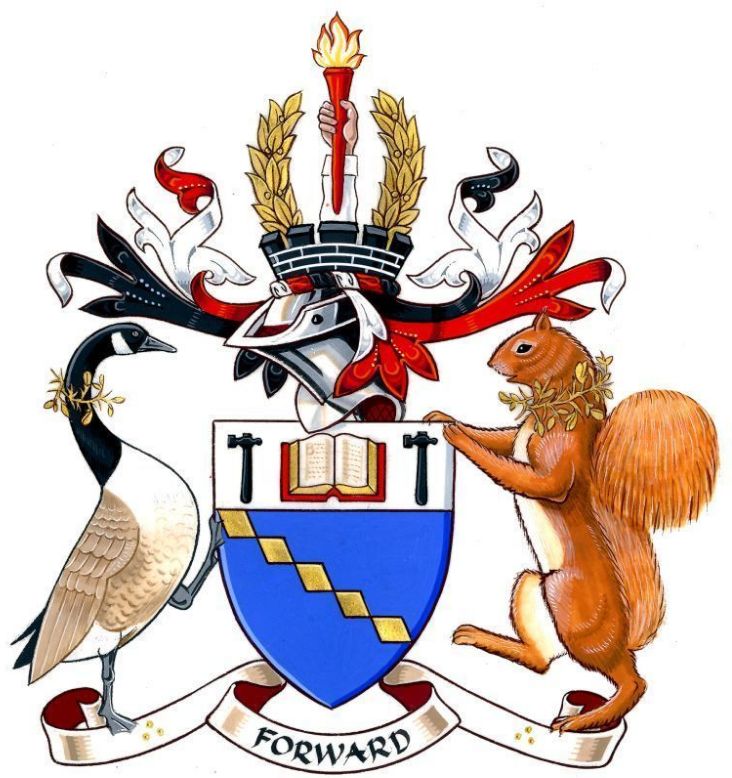 Arms : Azure, five lozenges conjoined in bend Or; on a chief argent, an open book proper, bound gules edged Or, between two hammers erect sable.
Crest: On a wreath argent, gules and sable, Out of a mural crown sable a cubit arm, vested argent, the hand proper holding a torch gules enflamed also proper, between two branches of laurel Or.
Supporters: To the dexter a Canada Goose and to the sinister a Red Squirrel both proper each wreathed about the neck with Gorse Or.

The five gold lozenges conjoined in a diagonal "bend" is taken from the first quarter of the Arms of the city of Birmingham. Those Arms were themselves taken from the original Lords of the Manor - the de Bermingham family - who used them from about 1413 to 1536. The fact that the city of Birmingham's Arms are directly referenced in the Arms of the College of Technology show how closely this educational institution was - and still is - entwined with the city and with industry.

The chief shows the connection of the University with industry; the book represents learning and the hammers, engineering and allied trades. Again, compare it to the City of Birmingham's Arms which are topped by a man's arm brandishing a hammer, but note that Aston University's are of a different type known as a ball-pein hammer. This hammer is specific to metalworking, with the round head used to smooth off the edges of metal pins and rivets and the flat head useful for striking punches and chisels.

The laurel branches in the crest traditionally symbolise academia and learning, but may have a dual purpose here; following the incorporation of Birmingham as a borough in 1838, the corporation adopted a seal comprising the de Bermingham family Arms encircled by a laurel wreath. So the laurel branches in Aston's crest could well be another echo of the links with Birmingham itself.

In 2016, to mark the University's 50th anniversary, then Vice-Chancellor, Professor Julia King, the Baroness Brown of Cambridge, requested from Her Majesty's College of Arms the favour of supporters to Aston University's arms. This was duly granted and the Letters Patent was formally presented to Aston University by the York Herald, Michael Peter Desmond O'Donoghue Esq., during a service at St Phillips Cathedral, Birmingham, on September 29th 2016.

The arms are supported by a Canada goose and a red squirrel. The squirrel is the crest of the arms of Aston Manor and is a rebus (the owners of Aston Manor were the Holte family and a squirrel's nest is called a holt). Because of this ancient connection between the squirrel and Aston, the animal also appears on the University mace and on the Chancellor's chain of office (the latter was originally the property of the Mayor of Aston Manor).
The Canada goose is a recent connection that symbolises the family of geese living on the University campus.

One further piece of symbolism is the gorse around the animals' necks. This is a reference to the settlement of Gosta Green - known as Gostie Green during the 18th century. It is thought that this was a conflation of the name of the original landowner (William de Gorsty) with the word 'gorse' (as gorse bushes were common nearby).

Literature: Scan from the October 2016 Newsletter of the College of Arms. Background from the university