From Heraldry of the World
Your site history : Australian Academy of Science
Jump to navigation Jump to search 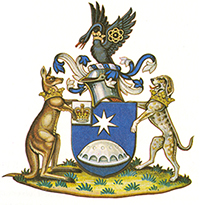 The arms show a representation of the Academy building. The seven-pointed star is taken from the Australian flag. The Royal Crown can only be, and here is, included in the arms by Her Majesty's special permission.

The black swan in the crest is intended to represent biological science, and the wing, with its conventional representation of the nucleus of an Atom, physical science. This black swan, is not only an Australian bird but, as such, is the dexter supporter to the arms of the city of Canberra.