From Heraldry of the World
Your site history : Australian Institute of Building
Jump to navigation Jump to search 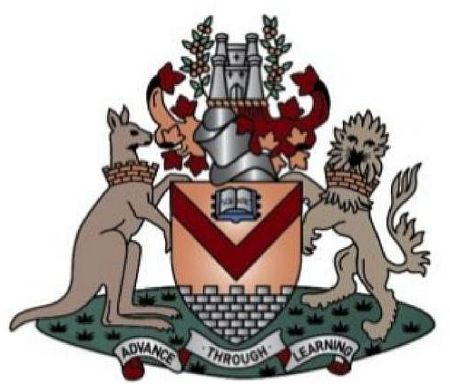 Arms : Or, a right-angled Chevron reversed Gules between in chief an open Book proper inscribed with the word 'Scientia' in Letters Sable, and in base throughout a Stone Wall embattled also proper.
Crest : On a Wreath of the Colours between two branches of Mimosa flowered proper a Castle of four towers also proper.
Supporters : On the dexter side a Kangaroo proper, and on the sinister side a Lion guardant also proper, each gorged with a Mural Crown Or.
Motto: 'Advance Through Learning'.

The shield of gold, divided by a right-angled chevron (to represent a square) with the book of learning in the top section indicating the Institute's educational activities.

In the base of the gold Shield there is an unfinished stone wall indicating the sound foundations upon which the Institute is established, and on which progress is continually being built.

The crest, a castle of four towers, emphasizes that building is the profession, and the castle is surrounded by two branches of wattle, the traditional flower of Australia.