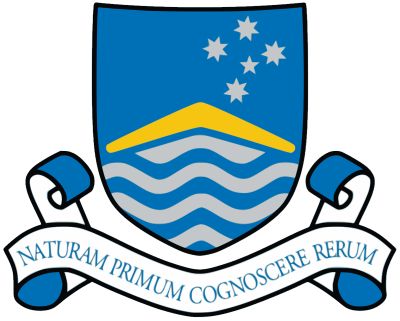 Arms : Per chevron Azure and Barry wavy of eight Argent and of the last, a Boomerang chevron­ wise Or, in sinister chief five Stars representing the Constellation of the Southern Cross also Argent.
Motto: 'Naturam Primum Cognoscere Rerum'

The lower part of the shield is conventionally 'barry wavy' to represent the sea, and the upper part, which includes the Southern Cross, is blue to represent the sky. The boomerang, as an Australian aboriginal missile weapon, is a typical symbol for Australia.