From Heraldry of the World
Your site history : Australian Society of Accountants
Jump to navigation Jump to search 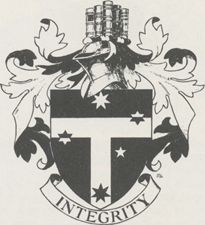 Arms : Azure, a Fess enhanced and in base a Pale Argent, over all a representation of the Southern Cross counterchanged.
Crest : On a Wreath of the Colours, five Books erect proper.
Motto: 'Integrity'.

The arms were officially granted on September 1, 1958.

The T formed by the fess and pale represents a double-sided account, and thus double entry book-keeping. The Southern Cross, and the books in the Crest, are symbols for Australia and accountancy.