From Heraldry of the World
Your site history : Aycliffe Development Corporation
Jump to navigation Jump to search 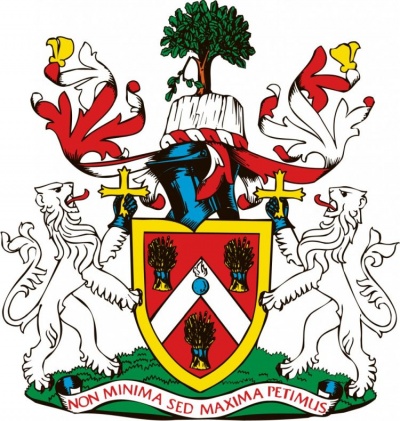 Arms : Gules, on a chevron argent between three garbs Or, banded vert, a grenade sable, fired proper; all within a bordure Or.
Crest: On a wreath of the colours, On a limestone cliff an oak tree fructed with a broken branch and another growing therefrom, all proper.
Supporters: On either side a lion argent holding in the interior paw in a steel gauntlet a cross patonce gold.
Motto: Non minima sed maxima petimus.

The border represents the boundaries of the designated site of the new town of Newton Aycliffe. The Chevron is an allusion to the bridge over St. Cuthberts Way linking the town with Aycliffe Business Park.

The sheaves of corn forming the garbs in the shield are taken from the Arms of the Eden Family, of whose estate the site of the new town formed a part, and the hand grenade on the chevron represents the Royal Ordnance Factory out of which the Business Park was converted.

The Crest consists of an oak tree on a limestone cliff surmounting a helm. The oak tree is a reference to the forests which formerly covered this part of the country from which was taken the Saxon name “acle” meaning “oak leaf”, from which the name of Aycliffe was derived. One of the branches of the oak tree is broken and bent down to indicate the disappearance from the area of its oak forests and with a lesser branch the letter “A”, thus forming a rebus on Aycliffe.

After the dissolution of the corporation the arms were transferred to the Great Aycliffe town council.