From Heraldry of the World
Your site history : Bakers' Company of Chester
Jump to navigation Jump to search 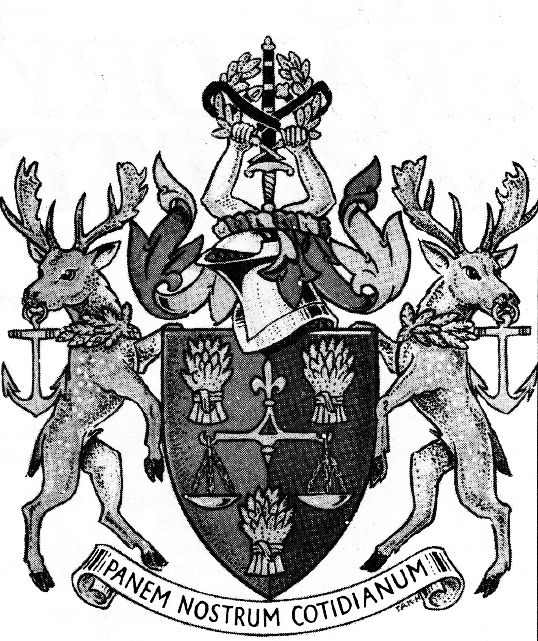 Arms : Per pale gules and azure, a balance the apex terminating in a fleur de lis between three garbs of wheat all Or.
Crest: on a wreath of the colours, between two arms em-bowed, holding in the hands a chaplet of wheat proper, a sword erect, hilt and pommel Or, sheathed sable, garnished Or, enfiling the chaplet and bound with a sword belt sable, garnished Or, entwined with the chaplet.
Supporters: on either side a buck reguardant attired Or, gorged with a chaplet of wheat proper and holding in the mouth by the ring an anchor Or.
Motto: Panem nostrum cotidianum.

The arms are based on the arms of the Bakers' Company of London and those of the City of Chester. From the former comes the balance, from the latter the red and blue background and the garbs are felicitously common to both. The fleur de lis and anchor refer to the Bakers connection with Our Lady and St. Clement.

In the crest the arms and chaplet of wheat from the City of Chester and the supporters are a rebus on the buckwheat formerly used in the baking of cheaper bread.

The motto 'Our daily bread' is from the Lord's Prayer.