From Heraldry of the World
Your site history : Baldock
Jump to navigation Jump to search 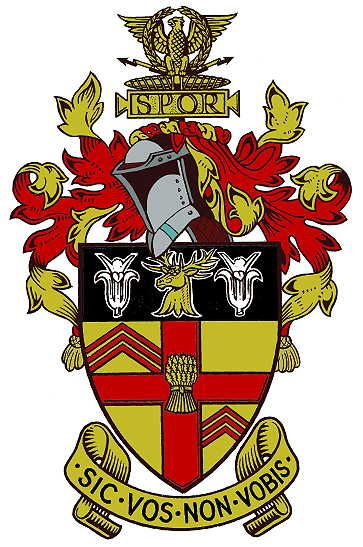 Arms : Or on a Cross between in the first and forth quarters three Chevronels Gules a Garb of the first on a Chief Sable a Stag's Head erased Gold between two Madonna Lilies proper.
Crest : On a Wreath of the Colours a representation of the Head of a Roman Centurion's Standard of SPQR with Thunderbolt Laurel Wreath and Eagle displayed Gold.
Motto: 'SIC VOS NON VOBIS'.

The red cross and black chief are from the arms of the Knights Templar, who were granted land by Gilbert de Clare, Earl of Pembroke. This land became the Parish of Baldock and the chevrons are from the arms of the de Clares. The sheaf of barley refers to the malting industry and the hart's head to the County. The lilies refer to the dedication of the parish church to St. Mary.

the head of the centurion's standard recalls the Roman settlement at Baldock.