From Heraldry of the World
Your site history : Balmoral junior secondary school
Jump to navigation Jump to search 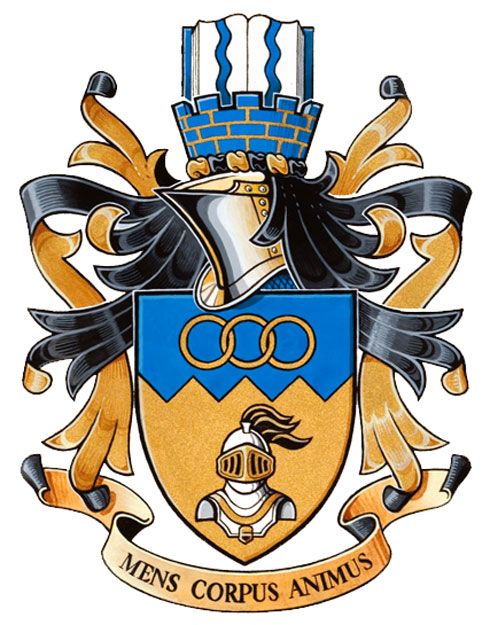 Arms: Or a knight’s helmet affronty Argent embellished Or plumed Sable, on a chief dancetty Azure three rings interlaced Or
Crest: Issuant from a mural coronet Azure masoned Or an open book Argent bound and charged on each page with a pallet wavy Azure
Motto: MENS CORPUS ANIMUS

The traditional colours of the school are black and orange, represented here by gold. The dividing line represents mountain peaks of the North Shore mountains which form the backdrop to the school’s setting. The interlaced rings symbolize the three central parts of the students’ learning experience: academics, arts (both applied and visual), and athletics. The knight’s helmet and plume is the current emblem of the school, alluding to the school’s teams.

The mural coronet symbolizes the school’s nickname, “The Castle”. The book is a traditional symbol for learning. The wavy blue bars on its pages represent the nearby mountain streams and which are represented in the coat of arms of the District of North Vancouver, where the school is sited.