From Heraldry of the World
Your site history : Bank of Adelaide
Jump to navigation Jump to search 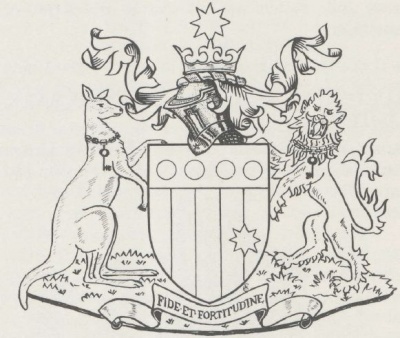 Arms : Argent, two Pallets Azure, on a Chief Gules four Bezants, and in sinister base a Star of eight points Or.
Crest : On a Wreath of the Colours, issuant from an Ancient Coronet, a Star of eight points Or.
Supporters: On the dexter side a Kangaroo, and on the sinister side a Lion guardant Gules, each gorged with a Chain, pendent therefrom a Key Or.
Motto: 'Fide et Fortitudine'.

Banking and finance are represented, traditionally, by coins, the four bezants (gold roundels), and the geographical location of the City of Adelaide by the rest of the Shield: i.e. the two blue pallets represent the waters of Spencer's Gulf and the Gulf of St Vincent, the white background the adjacent land areas, and the star the City itself, on the shores of the Gulf of St Vincent.

The eight­ pointed star in both Shield and Crest is a tribute to Colonel William Light, the planner of the City, and the coronet in the Crest alluded to the Queen after whom the City was named.

The supporting red kangaroo, like the City of Adelaide's, derives from 'Tandanya' ('the place of the red kangaroo'), the aboriginal name for the site of the City. The lion shows the City's link with Britain, and the link collars and keys on both Supporters indicate strength and security.