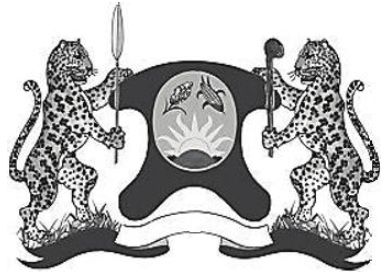 Arms: On a traditional shield Brunatre an oval Azure (sky blue), charged in base of a mount Vert, issuant therefrom a demi-sun Or, and in chief dexter a sorghum head slipped and leaved and sinister a maize-cob, slipped and leaved all proper.
Supporters: Statant upon a motto ribbon Brunatre, heightened on either side of a rocky ground with leaves issuant proper, on either side a leopard, that to dexter bearing a spear in its dexter paw and that to sinister bearing a knobkierie in its sinister paw all proper.
Motto: PELE YA PELE

The arms were officially granted in 2016.

If you have any information on these arms Ba Mokgalong Traditional Community mail us !