From Heraldry of the World
Your site history : Beckerich
Jump to navigation Jump to search 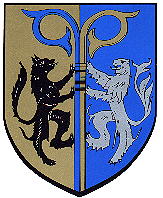 The wolf in the right part of the shield is taken from the arms of the Elvange family, who ruled the village in the 14th century. The lon in the left part is taken from the arms of the Lords of Guirsch, who ruled over Levelange and Oberpallen, two villages in the municipality. The two sticks represent the monasteries in Clairefontaine and Marienthal, who had numerous possessions in the area.