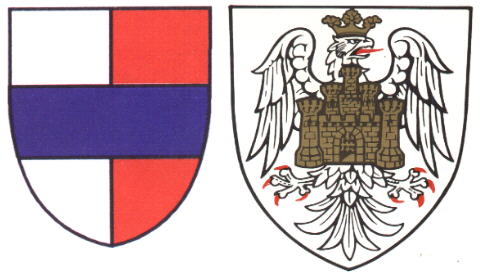 Both arms were officially recorded in 1566 and have been used since. Exemplified to the North Bedfordshire Borough Council by the Kings of Arms on December 30, 1977.

Bedford uses both arms. The arms with the eagle are used more widely however.

The castle on the eagle is taken from the oldest known seal of Bedford, dating from the 15th century. The second seal also showed the castle, but flanked by two salamanders. It also dates from the 14th century. The eagle and castle appear on the seals in 1836, but as mentioned above, are used as arms since at least 1566.

Literature : The arms and seals of the borough of North bedfordshire, published by the council in 1978.