From Heraldry of the World
Your site history : Bedford School
Jump to navigation Jump to search 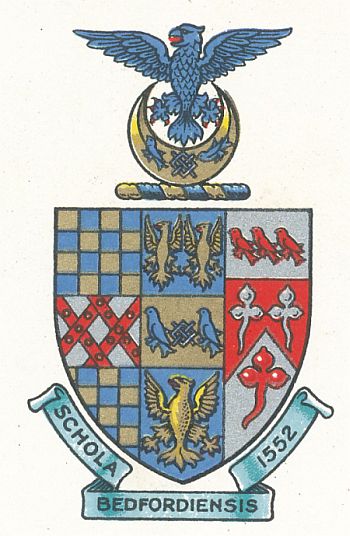 Azure, on a fess between three eagles displayed or, a fret between two martlets of the first, impaling, on the dexter side chequy or and azure, a fess argent fretty gules bezanté and on the sinister, per chevron gules and argent, three trefoils slipped, counterchanged, on a chief of the second three martlets of the first.

The arms have not officially been granted, but have been in use for several centuries.

The middle part shows the arms of Sir William Harper, who was born in Bedford about 1496, became Sheriff of London, Master of the Merchants Taylors' Company and, in 1561-2, Lord Mayor of London. He was knighted in 1561 and was granted these arms.

Sir William together with his wife Alice founded or endowed the Free Grammar School at Bedford and placed the endowment under the trusteeship of the Mayor and Burgesses of Bedford. In the eighteenth century the trust was reorganised by act of parliament and the Harpur Trust of the Bedford Charity was established. The change in spelling of the benefactor's name was a scribal error which has never since been corrected. Both in his will and in all contemporary records Harper's name is spelt with "e" and not "u".

The two other parts of the arms are supposedly those of his two wives. The arms of the Thorne family (Alice'family) are quite different from the ones in the school arms, but the arms with the chequy field and bare are mentioned as her arms in a manuscript from 1569. The third part is attributed to his second wife Margaret, but her arms are not officially described.