From Heraldry of the World
Your site history : Bernard Arthur Juby
Jump to navigation Jump to search

DR. BERNARD ARTHUR JUBY, LORD OF THE MANOR OF HOBY 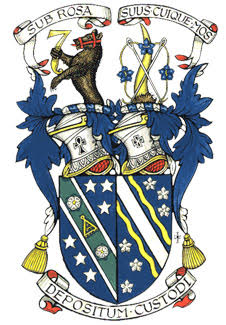 Crest: A demi-bear proper muzzled Gules holding in the paws a fleam Or (Juby). In front of a bull's dexter horn erect Or with scalp proper two bodkins saltirewise Argent and three cinquefoils Azure one and two threaded Or (Lines).

Motto: Depositum Custodi, (Keep that which is committed to thee) and, Sub Rosa (In Confidence) (Juby); Suus Quique Mos (To each according to his own) (Lines).

With Sir Walter Verco, Norroy & Ulster King of Arms, acting as the petitioner’s Agent, the College of Arms Granted to him the arms “Vert, a chevron paly Argent and Rouge between in chief two roses Argent barbed and seeded Proper and in base a triangular harrow Or” and for crest, “A demi bear Proper muzzled Gules and holding in the paws a fleam Or.” The Motto used was “Depositum Custodii” (Keep that which is committed to you). This was the armiger’s favourite quotation from M R James’ horror story, “The Treasure of Abbot Thomas”. It also summed up his feelings since the Church had appropriated some land from the family by stating that a relative did not exist - even though they subsequently called on that very same person to witness a Deed! The Letters Patent for these arms were dated the 5th March 1974.

As Sir Walter subsequently admitted to the armiger, he had omitted to check the de Houby arms so this achievement was created from scratch to reflect the armiger’s medico-surgical background with the Barber-Surgeons’ red and white pole and the fleam (or lancet), the harrow on a green field (triangular to fit the shield) for the centuries of East Anglian farming and the white roses as a Ricardian and one-time Lords of the Manor over which the Battle of Bosworth was fought. The crest was a Bear, from the armiger’s first name, Bernard (bear-like) and an in-joke, muzzled because he gave a lot of public speeches.

On the 10th March 1981 - again with Sir Walter- Dr. Juby was Granted his own design for the Badge and Standard of “An Egytian Ankh Gules surmounted by a rose Argent slipped and leaved Proper”: Medicine again for the ankh is a symbol of long life and health with the rose for obvious reasons. The ankh was also a pun on the name of the armiger’s earliest forebear, Anketil de Normandie who was invited by William the Conqueror to help administer his new realm. He was given the Manors of Houby (now Hoby), Sutone Cheynill (Sutton Cheyney) and Anabein (Ambion Hill), all in Leicestershire, and took his name from the largest of these. The de Houby family changed to the phonetic J in the 14th Century.

On the death of Sir Walter, John Brooke-Little, Norroy & Ulster, took over the Agency and, after much research in the family archives, State Papers, Calendar of Close Rolls, Pedigrees from the Plea Rolls and Inquisitions Post Mortem the armiger was able to show descent from de Houby and was Granted an updated shield by Letters Patent on the 15th July 1996 of de Houby suitably differenced.

On each of these Letters Patent Dr. Juby has included a reference to each of his Agents (currently Robert Noel) and he is particularly proud of the last since it was painted by William Bainbridge shortly before his early death on the 27thOctober 1996. Mr. Brooke-Little informed the armiger that it was the very last item that he painted.

The armiger’s wife, Pamela, is the armorial heiress of her late father, William Edward Lines of Leicestershire and since then Dr. Juby has proudly borne his arms in pretence. Their eldest son uses the Motto, “Sub rosa” (In Confidence, lit. Under the Rose) and their children & grandchildren quarter the arms, suitably differenced.

Granted in the United Kingdom by the College of Arms

Registered with the International Register of Arms, 29th October 2015. Registration No. 0370 (Vol.3)