From Heraldry of the World
Your site history : Birmingham and Midland Heraldry Society
Jump to navigation Jump to search 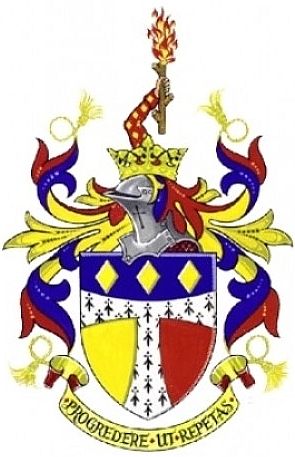 Arms : Per pale Or and Gules, a chief Azure sustained by a Cross Tau throughout Ermine and in chief three Lozenges gold.
Crest: Out of a Crown Or a dexter arm embowed vested Gules semi of lozenges also Or the hand proper grasping palewise a staff raguly enflamed proper.
Mantling: Gules and Azure lined Or.
Motto: Progredere Ut Repetas

The original Arms borne by eight generations of the Lords of the Manor of Birmingham were "Azure a bend of lozenges Or". These Arms were used in the chief, the three lozenges representing the three counties of Staffordshire, Warwickshire and Worcestershire. The remaining colours are derived from the Arms of Robert de Birmingham 'Per Pale indented Or and Gules' and also appear on the Arms of the City of Birmingham.

The Tau Cross represents the T for the genealogical tree and the tinctures of black and white are derived from yet another de Birmingham - Henry. Ermine also appears on the Arms of the City of Birmingham, from the Calthorpes, Lords of the Manor of Edgbaston.

The Crest is in the form of a crest-coronet and provides a parallel to the mural crown of the City's Crest as does the arm embowed. The original flaming torch to signify learning and teaching was too close to other, similar Crests and so the raguly staff of Warwickshire (since Birmingham was originally in Warwickshire) was used in the form of a flaming torch. It also represents the various branches of the Family Tree.

The Motto means "Go forth and seek the past", aptly sums up the aims and ambitions of the genealogist and the heraldist.