From Heraldry of the World
Your site history : Bishop Grosseteste University
Jump to navigation Jump to search 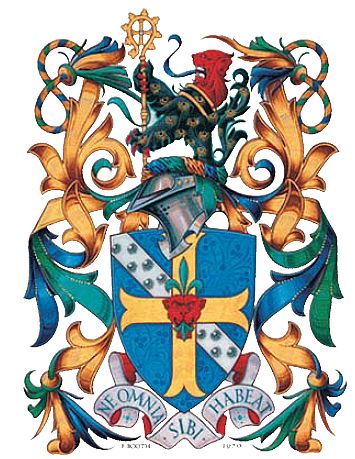 Azure, a bend ermine; over all on a cross moline Or a leopard's face gules jessant-de-lys vert.
Crest: On a wreath Or, azure and vert, A demi­ lion pean, the head gules, gorged with a collar gemel and supporting a crosier the head enclosing a cross moline square-pierced Or.
Motto: No omnia sibi habeat.

The arms were officially granted on June 26, 1969 to Bishop Grosseteste College.

The ‘bend ermine’, symbolizes Ermine Street, a powerful symbol of Lincoln’s geography and Roman history. The University buildings are sited upon the area occupied, in its day, by the house of the Commander of the 9th Legion.

The jessant-delys - a leopard’s face gules with a fleur-de-lys in the open mouth - is a component of the City of Lincoln’s coat of arms.

The crest is a demi-lion, probably reflecting the family crest of the Sibthorp family who had a relationship with the college in its early days. Sibthorp was Member of Parliament for the city of Lincoln. However, unlike the Sibthorp demi-lion holding a fleur-de-lys, our demi-lion is holding symbolically a Bishop’s crozier facing outwards.

The motto, NE OMNIA SIBI HABEAT, could be taken as a play on the Sibthorp name. However, it translates as:- LEST HE SHOULD HAVE ALL THINGS UNTO HIMSELF or, in more colloquial English:- DON’T KEEP IT ALL TO YOURSELF.