From Heraldry of the World
Your site history : Bishops' College, Cheshunt
Jump to navigation Jump to search 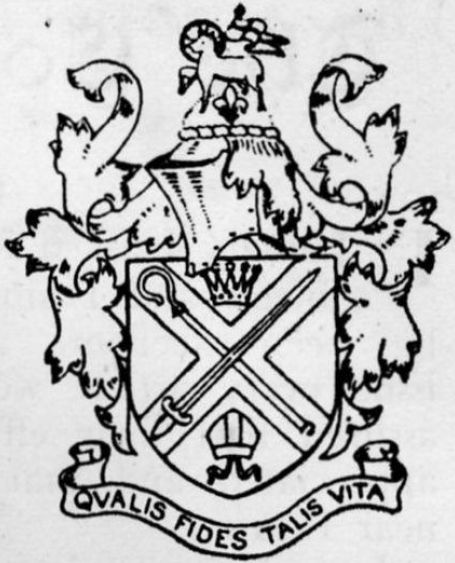 Arms: Azure, on a saltire between in chief a celestial crown and in base a mitre Or, a crozier and a sword, point upwards, in saltire proper.
Crest: On a wreath of the colours, In front of a mount vert, thereon a Paschal Lamb proper, a fleur-de-lys argent.
Motto: Qualis fides talis vita.

The arms were officially granted on February 26, 1952.

The College was founded by Canon Frederick Fox Lambert, Vicar of Cheshunt, on 20th October. 1910.

The arms also recall the name Bishops' College by the inclusion of a bishop's mitre and staff. The saltire and sword are a reminder to members of the College that through persecution even unto death they must be prepared to bear witness to Jesus Christ, that "when he shall be manifested they shall receive the crown of glory that fadeth not away " (I Peter V, 4), which is symbolised by the celestial crown in the arms.

The crest has a two-fold meaning. The Paschal Lamb, the ancient symbol of our Lord, carried high on the helm is a reminder of Him whose Gospel the students will go forth to proclaim, and the three-petalled fleur-de-lys is for the Holy Trinity. The secondary meaning of the crest is a reminder of the founder, Lambert being signified by the Lamb, while the white fleur-de-lys is for the Blessed Virgin Mary, to whose honour the parish church at Cheshunt is dedicated.

The meaning of the motto is "As is your faith so is your life'.