From Heraldry of the World
Your site history : Blyth Harbour Commission
Jump to navigation Jump to search 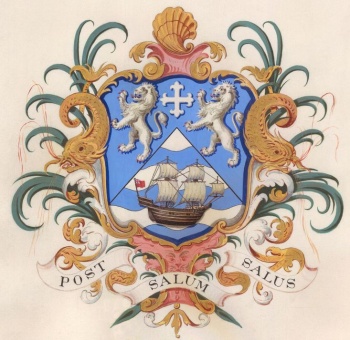 Arms : Per chevron azure and harry wavy of six argent and of the first, in chief a cross fleury between two lions rampant of the second and in base an ancient two-masted ship in full sail proper.
Motto: Post salum salus.

The arms were officially granted on March 4, 1925.

The lions and cross refer to the monastery of Durham, the ancient lords of the area.

The sailing ship is associated with the collier brigs which were built on the river at Blyth, and which for decades sailed from the port with coal.

The martlets are from the Ridley Coat of Arms, the Ridley family having had a major role in the ownership and development of the harbour.