From Heraldry of the World
Your site history : Borough Road College
Jump to navigation Jump to search 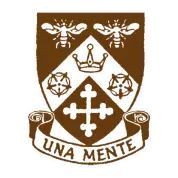 Arms: Azure, on a chevron argent between in chief two bees volant and in base a cross botony Or, a Saxon crown between two roses gules, barbed and seeded proper.
Motto: Una mente

If you have any information on these arms Road College mail us !