From Heraldry of the World
Your site history : Boyd Garrison
Jump to navigation Jump to search 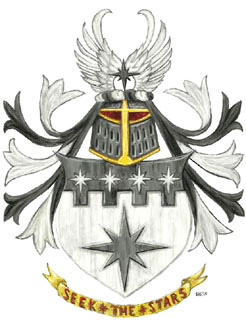 Argent a nova and on a chief embattled Sable four novae Argent.

The nova (a star of eight points with cardinal points elongated) Sable symbolizes the armiger's fascination with astronomy and interstellar space, the embattled chief is a cant on the armiger's surname representing the walls of a fortress garrison and the four novae Argent indicate the armiger's four children.