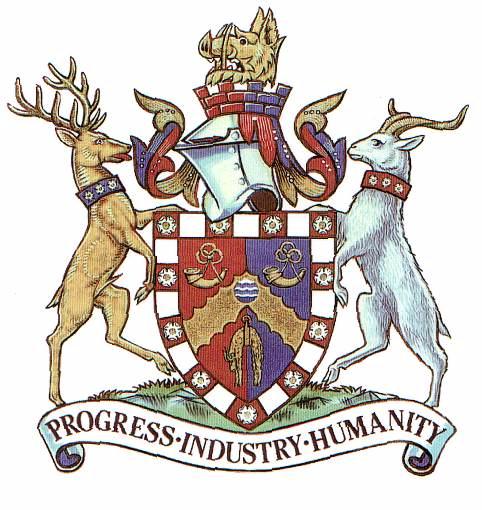 Arms : Per pale Gules and Azure on a Chevron engrailed between in chief two Buglehorns stringed and in base a Fleece Or a Fountain the whole within a Bordure gobony of the first and Argent charged on the Gules with eleven Roses of the last barbed and seeded proper.
Crest : Upon a Mural Crown per pale Gules and Azure a Boar's Head sans Tongue erased Or; Mantled Azure and Gules doubled Or.
Supporters : On the dexter side a Stag Or gorged with a Collar Azure thereon three Roses Argent barbed and seeded proper and on the sinister side an Angora Goat Argent horned Or gorged with a Collar Gules charged with three like Roses.
Motto: 'PROGRESS INDUSTRY HUMANITY'

The shield is based on the arms of the old Bradford city Council, with additions to indicate the merger of 11 Yorkshire councils. The original Bradford shield was granted in 1847, and featured a red and blue per pale field bearing an engrailed gold chevron between threee hunting horns. In the new arms the third horn has been replaced by a fleece, representing the Wool Industry. This is derived from the arms of Baildon, Bingley and Silsden as well as the device of Queensbury and Shelf. The chevron is charged with an heraldic fountain, which replaces the well of the 1847 grant. A fountain was found in the arms of Keighley and Silsden.

A red and white compony bordure has been added to the arms, and this is charged with 11 white roses. The white rose is the well known emblem of Yorkshire and thus denotes the union of eleven Yorkshire councils.

The boar's head in the crest refers to the legend of the boar of Cliffe Wood. This was a ferocious boar that lived in the wood on the outskirts of Bradford, and frequently drank from a well in the wood. The boar terrorized the populace and caused much damage to land and property; so much so that the Lord of the Manor offered a reward for anyone brave enough to slay the boar and bring its head to the Manor House. A hunter took up the Lord's offer, and lay in wait near the well, ready to catch his quarry and thereby claim his reward. The boar duly arrived, and was shot by the hunter, who cut out the boar's tongue as proof of his victory and set off for the Manor House. A little time later, another hunter who had heard of the Lord's offer, was passing through the woods and saw the slain boar lying near the well. Thinking of the reward he would receive, he cut off the boar's head and he too set off for the Manor House. Arriving there before the true victor, he claimed his reward for having disposed of the ferocious creature, but was unable to account for the boar's absent tongue. The first hunter then arrived, explained the true circumstances of the defeat showing the boar's tongue as evidence of his veracity and received his rightful reward; a plot of land called Hunt Yard just outside the town.

The boar's head in the crest is mounted on a top of a mural crown, symbol of local government, but also suggesting a well head. The crown and the mantling continue the distinctive red and blue colouring from the arms. When Bradford was granted City status in 1907, supporters were added to the arms. The dexter supporter was a black ram but this has been replaced with a stag. The stag is derived from the heraldry of Denholme and Keighley, but represents the District as a whole. The sinister supporter is retained from the 1907 grant and is a white angora goat. The wool of this animal was used in the local industries. Each supporter has a colour bearing Yorkshire roses, one blue and one red, again echoing the shield. The supporters stand upon a compartment resembling the area's hills and dales. 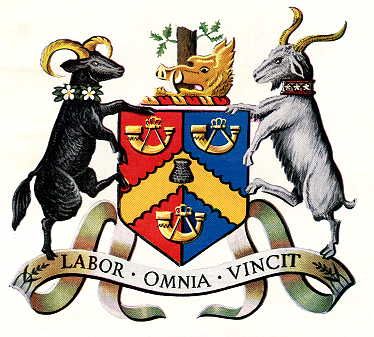 Arms : Per pale Gules and Azure on a Chevron engrailed between three Bugle Horns stringed Or a Well Sable .
Crest : On a Wreath of the Colours a Boar's Head [sans tongue] erased Or in front of the Trunk of a Tree sprouting proper.
Supporters : On the dexter side a Ram Sable horned Or and gorged with a Wreath of White Roses proper and on the sinister side an Angola Goat Argent horned Or and gorged with a Collar Gules thereon three Roses also Argent.
Motto: 'LABOR OMNIA VINCIT' - Labour overcomes all things

The bugles recall the ancient and annual custom of blowing the horn and holding a dog on St. Martin's day in the forenoon, in the Market Place at Bradford. This commemorates part of the service which John Northrop of Manningham owed to John of Gaunt for his lands.

The boar's head refers to the legend of the boar of Cliffe Wood, see above.

The black ram and white angora goat recall that the wool of these animal was used in the local industries. The roses refer to Yorkshire.