From Heraldry of the World
Your site history : Bradford Permanent Building Society
Jump to navigation Jump to search 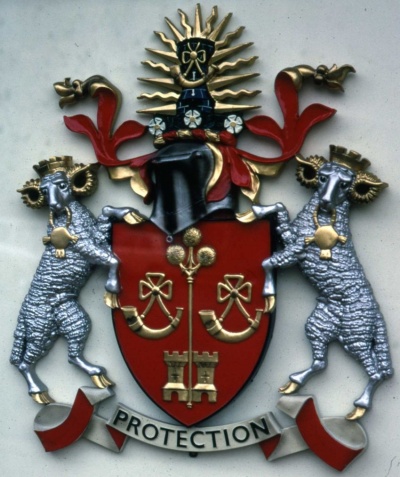 Arms: Gules, between two bugle horns in fesse stringed, a key in pale, the bow in chief in the form of three thrift flowers conjoined upon one stem, the double wards in the form of two towers, all Or.
Crest: On a wreath of the colours, Out of a garland of roses argent, barbed, seeded and leaved proper, a tower sable irradiated with rays of the sun and pendent from the battlements thereof a bugle horn stringed Or.
Supporters: On either side a ram guardant argent, armed, unguled, murally crowned, and holding in the mouth by the string a tasselled purse Or.
Motto: Protection

The arms were officially granted on August 1, 1966.