From Heraldry of the World
Your site history : Bradford Textile Society
Jump to navigation Jump to search 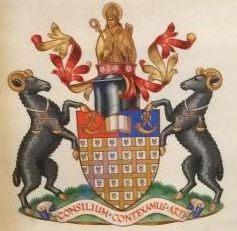 Arms : Ermine, five pallets and as many barrulets fretted Or; on a chief per pale gules and azure an open book argent, edged and bound also Or, between two bugle horns stringed gold.
Crest: Out of a circlet gules charged with three roses argent, barbed and seeded proper, a demi figure representing St. Blaize in episcopal robes mitred and nimbed, in the dexter hand a crosier and in the sinister hand and resting on the shoulder a woolcomb, all Or. Mantled gules, doubled Or. Supporters: On either side a ram sable, armed and un­guled Or, gorged with a riband azure, pendent therefrom a pair of scales gold.
Motto: Consilium contexamus arti

If you have any information on these arms Textile Society mail us !