From Heraldry of the World
Your site history : Bradford and Bingley Building Society
Jump to navigation Jump to search 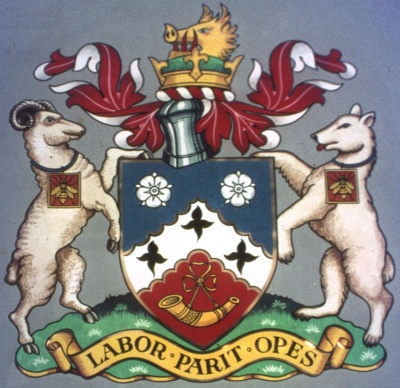 Arms: Per chevron gules and azure, on a chevron engrailed between in chief two roses argent, barbed and seeded proper, and in base a bugle horn stringed Or, three trefoils slipped sable,
Crest: On a wreath of the colours, Out of a Saxon crown Or a mount vert, thereon a boar's head erased Or sans tongue and armed gules.
Supporters: On the dexter side a ram argent, armed and unguled Or; and on the sinister side a bear argent; each gorged with a riband azure, pendent therefrom a billet gules charged with a bee volant Or.
Motto: Labor parit opes

The arms were officially granted on August 5, 1964.

If you have any information on these arms and Bingley Building Society mail us !