From Heraldry of the World
Your site history : Brasenose College (Oxford University)
Jump to navigation Jump to search 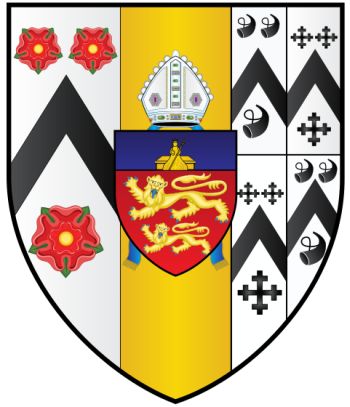 Entered at the Visitation of 1575.

In 1507 Bishop Smith (or Smyth) of Lincoln, together with Richard Sutton, conceived the idea of founding a College and in 1509 the foundation stone of the new college was laid. The College which was built round Brasenose and other old halls, was called The King's College of Brasenose. The rather complex arms show the arms of Smith's See of Lincoln surmounted by his mitre on a field of Gold in the centre, whilst on the dexter are his own arms, argent a chevron sable, between three roses gules, barbed and seeded proper, and on the sinister are Sutton's arms, argent a chevron between three bugle horns stringed sable, quartering, argent a chevron between three cross crosslets sable for South-worth. Sutton was the first layman to found a college.