From Heraldry of the World
Your site history : Bremen
Jump to navigation Jump to search 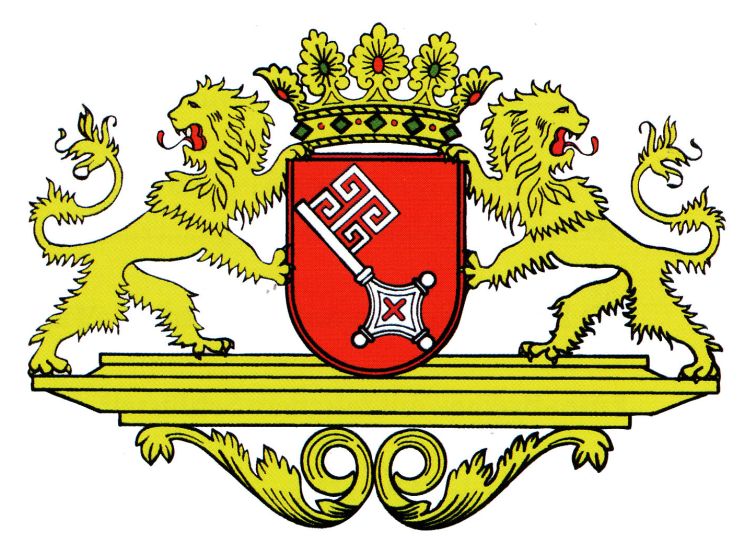 Bremen is the smallest of the German states, with no other towns besides Bremen and bremerhaBremerhaven]]. The town was founded on the banks of the river Weser and became a seat of a bishop in 780. In 965 the town was granted some special privileges, like the right to issue coins. In 1030 the first city walls were erected and in 1139 it was considered a city. In 1217 it was officially granted city rights. The city was a member of the Hanseatic League and a free imperial city. It has thus been an important city throughout the history.

The first known seal dates from 1234, but is probably made before 1220. It shows a bishop and an emperor, who hold a cathedral church above them. Between the two figures the city walls can be seen. Later grand-seals always show both a bishop, often depicted with a key, and an emperor. Smaller seals more often showed a key as a specific symbol for the city. The key is the key of St. Peter, the patron saint of the city. The key also appears on coins of the city from the 14th century onwards. It also appears on the arms of the city, on maps and stones throughout the city.

The colours of the arms have always been red and white. The first supporters appear in the 16th century , two angels holding the shield. From 1568 they are replaced by two lions. In 1617 a helmet appeared on the shield. The helmet was never officially granted, but is still used on the great-arms of the city (see below). The crown appeared first in the late 16th century.

The arms were first officially granted by Napoleon on June 13,1811. The arms showed a chief of red with the three golden bees (the symbol of a city of first rank), but the key was made black on a golden shield. These are the only arms in which the colours were changed.

In 1833 the arms were again granted and finally in 1891 the present arms were granted.