From Heraldry of the World
Your site history : Brighton Grammar School
Jump to navigation Jump to search 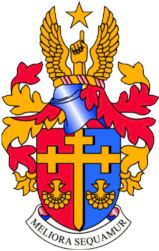 Arms : Per pale Gules and Azure. a Cross-crosslet fitchy throughout between two Escallops in base Or.
Crest : On a Wreath of the Colours, between a pair of Wings, a dexter Hand couped at the wrist with the index finger pointing to a Mullet all Or.
Motto: 'Meliora Sequamur'.

The Crest derives from the badge devised by Dr Crowther, founder of the original School, and by his Art master. When the school was incor­porated after Dr Crowther's death in 1918, it was re-established on lands that had been granted to the Church of England by Henry Dendy and J. B. Were.

The escallops and the cross-crosslet are charges from Arms of families of Dendy and Were respectively.