From Heraldry of the World
Your site history : British Antique Dealers' Association
Jump to navigation Jump to search 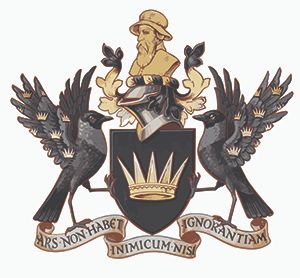 Arms : Sable, an antique crown Or.
Crest: On a wreath of the colours, A golden bust of Benvenuto Cellini proper.
Supporters: On either side a jackdaw, wings elevated, proper, the underside of the wing semee of antique crowns Or.
Motto: Ars non habet inimicum nisi ignorantium

The antique crown is canting and the jackdaws represent the collectors (the birds are famous for collecting items, here again they have collected crows under their wings).