From Heraldry of the World
Your site history : British Columbia Institute of Technology
Jump to navigation Jump to search 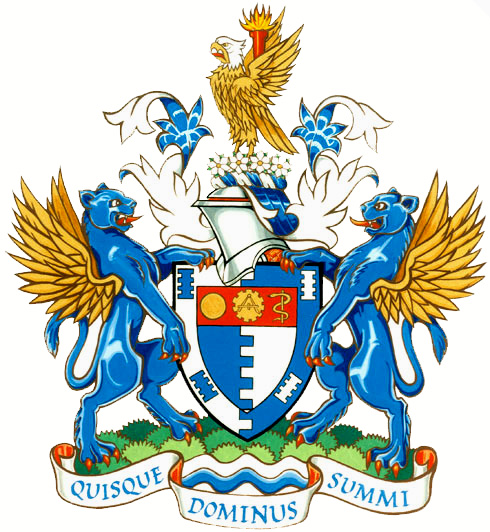 Arms : Per pale embattled Azure and Argent on a chief Gules a cogwheel charged with an open compass between dexter a bezant and sinister a rod of Aesculapius all Or within a bordure per pale embattled Argent and Azure charged with four billets bretessed counterchanged
Crest : Issuant from a circlet of dogwood flowers Argent seeded Or leaved Vert an eagle Or head Argent beak Or issuant between its wings elevated and addorsed a torch Gules enflamed Or
Supporters : On a grassy mound Vert above barry wavy Argent and Azure on either side a cougar Azure armed and langued Gules winged Or
Motto: Quisque Dominus Summi

The arms were officially granted on February 29, 1996.

Blue and white are the colours used in the arms of the province of British Columbia. The vertical dividing line is used to dramatize an essential feature of BCIT’s approach to learning, the interplay and fusion between theory and practice. This division also alludes to the Institute’s global links. The Institute’s programs of study are represented by the coin, which symbolizes business, the compass and the cogwheel, which allude to the study of trades and engineering; and the staff with snake which refers to health studies. The computer chips symbolize technology and the four main campuses that comprise the Institute.

The dogwood flowers represent the provincial character and mandate of the Institute. The eagle symbolizes the spirit of the students, faculty and all members of the Institute’s community - searching for knowledge and understanding, being far-seeing in their endeavours. It is also a powerful emblem of British Columbia and the riches of the natural environment. The eagle, considered an honoured symbol of First Peoples, serves to celebrate their heritage. Lastly, it is a charge taken from the arms of the City of Burnaby, the location of the Institute’s central campus. The torch represents the light of knowledge and striving for excellence.

The cougar is a British Columbian animal and its wings allude to BCIT’s programs dedicated to aviation. The cougars stand on a grassy mound representing the fields on the various campuses, and the wavy bars indicate Guichon Creek, which is found on the main campus, as well as the ocean and other bodies of water located near the Institute’s campuses. The grass and water suggest the strong environmental orientation of the programmes of study offered by the Institute.

The motto means “Each is master of the summit”.