From Heraldry of the World
Your site history : British Computer Society
Jump to navigation Jump to search 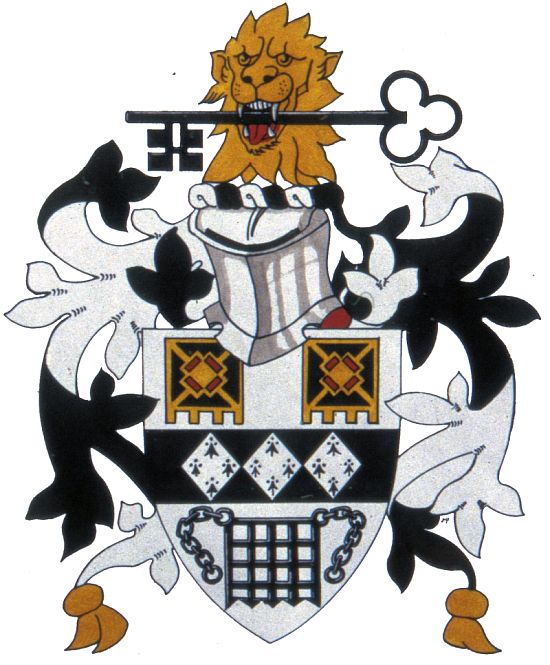 Arms : Argent, on a fess sable, between in chief two computer ferrite core memory store matrices proper, and in base a portcullis chained sable, three lozenges conjoined ermine.
Crest: On a wreath of the colours a lion's head affronty Or, holding in the mouth a key fesswise sable.

The arms were officially granted on December 1, 1970.

The two sections of the field represent human aspirations and achievements, bridged by a fess symbolising the only means of crossing the gulf: the Bridge of Absolute Truth. The devices in chief refer to data recording and storage. The description 'proper' applied to these objects will be meaningless to most, so it is as well to add that on the grant they are depicted as above. Echoing their shape in base there is a portcullis, which provides a heraldic link with the City of Westminster, where the Society's headquarters are located. It serves as a reminder of the responsibilities of the Society to the whole community. The ermine lozenges are taken from the arms of the Rt. Hon. Earl of Halsbury, the Society's president at the time of the grant. Incidentally, one of the ermine lozenges from the Earl's arms also appears in the shield of the Brunel University, of which he is Chancellor.

In the crest the lion's face depicts eternal vigilance over the integrity of the Society and its members. The key denotes the unlocking of the Store of Knowledge, or data retrieval, and also signifies the concern of the Society with the problems of computer privacy