From Heraldry of the World
Your site history : British Interplanetary Society
Jump to navigation Jump to search 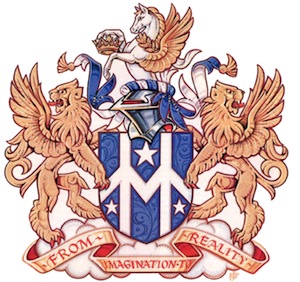 Arms : Azure a fess dancetty of two points conjoined to as many pallets between three mullets one in chief two in base.
Crest : Upon a helm with a wreath argent and azure a demi horse argent winged gorged with a laurel wreath and supporting between its hooves an astral crown all gold.
Supporters: On either side a winged lion regardant gold the compartment comprising clouds proper.
Motto: FROM IMAGINATION TO REALITY

The arms show a stylised version of the spaceship logo that was adopted in 1954 but with two rockets. The stars were originally intended to represent earth space, near space, and deep space.

The horse in the crest represents transport and communication with the wings alluding to the celestial environment. The laurel wreath represents achievement and honour, and the astral crown (a crown of stars) represents pre-eminence among the stars.

The supporters are lions, the British national symbol. Their wings (like those of the horse crest) allude to the celestial environment as do the clouds they stand on.

The British Interplanetary Society adopted the motto “From Imagination to Reality” which was taken from the sub-title of the book “High Road to the Moon” that it had recently published in 1985.