From Heraldry of the World
Your site history : British Limbless Ex-Servicemen’s Association
Jump to navigation Jump to search 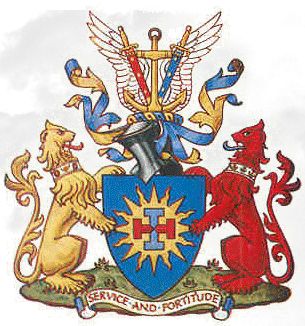 Arms : Azure, in front of a sun in splendour Or, a cross• potent per saltire of the first and gules.
Crest: On a wreath of the colours, In front of a pair of wings conjoined in base argent, an anchor Or between two sheathed swords pilewise, points downwards, the dexter sheathed gules and the sinister azure, both garnished gold, the hilts and pommels also gold.
Supporters: On the dexter side a lion sejant Or, collared argent, on the collar a daffodil slipped and leaved proper between two roses gules barbed and seeded also proper; and on the sinister side a lion sejant gules, collared argent on the collar a shamrock between two thistles stalked and leaved proper.
Motto: Service and fortitude.

If you have any information on these arms Limbless Ex-Servicemen’s Association mail us !