From Heraldry of the World
Your site history : British Overseas Airways Corporation
Jump to navigation Jump to search 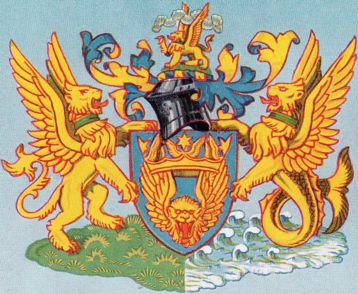 Arms: Azure, a lion's face winged, the wings enfiled with an astral crown Or.
Crest: On a wreath of the colours, Upon a mount vert a winged lion passant Or collared of the first, the tips of the wings enveloped in clouds proper.
Supporters: On the dexter side a winged lion and on the sinister a winged sea lion, both Or, and each gorged with a collar vert.

If you have any information on these arms Overseas Airways Corporation mail us !